Chargers pull out a win 86-81 over Trinity College of Florida in the last Men’s home game of the season. After a slow start, Coach Hall and the Chargers were determined to control the second half.

“ We played great team defense in the second half and limited them to one shot”, Coach Hall said after the game.

#4 Glenn Grover, Jr. put up 18 points along with #32 Orpheus Rankins. #30 Trajan Fielder sank two three pointers in the first half for a total of 14 points.

The Chargers improve to 4-13 in the NCCAA division.

The Southeastern Chargers finish out the season on the road with their next game at Pensacola Christian College. The Eagles of Pensacola are currently 5-16 in the NCCAA division.

The Eagles will be looking to gain a win after falling to the Chargers on January 9th in The PMC. 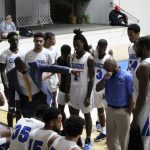 The Chargers tip-off their last home game of the season this Saturday at 1:00 pm. Trinity College of Florida will take the court hoping to redeem themselves after their 92 – 77 loss to the Chargers in November.